I’ve decided that I’m going to start throwing short stories and writing snippets on this blog. It will be a good place to collect the spur-of-the-moment writing that I do. I mean, would you rather read about yet another ‘author experience’, or read a neat little tale about dragons and cowboys?

Yeah, I thought so. 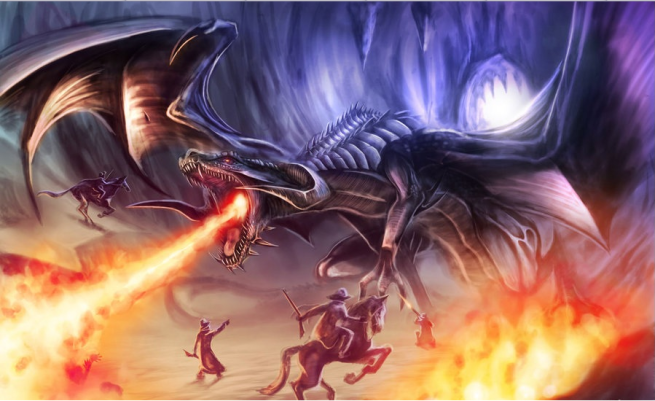 Dust swept across the trembling ground as John Michael Moort rode his steed into the canyon. He was close this time, he knew it. Every breath brought a new tremor in the canyon floor that he could feel, even atop his wide-eyed stallion.

John was armed with only a short blade of black iron and an equally-dark pistol at his hip. He wore a wide-brimmed hat that had been crushed by many a tussle, but still fit him well-enough with the drawstring he’d woven through it. His clean-shaven jaw was set, his eyes glimmered with anticipation. He urged his horse forward, and it shrieked a whinny of protest as it surged on. Soon he’d have to ditch the animal and continue on foot. The horse was probably smarter than he was.

Once again, the ground trembled and a deep-throated roar overwhelmed the canyon with sheer sonic volume. The air itelf shook, as if the force of the roar was tearing it apart.

John’s horse was through. It stopped, bouncing up on its front legs, and John quickly dismounted before the beast could run the other way. And run it did, tail flying out behind it, eyes rimmed with the white of fear and madness. That was how John ought to be feeling. After all, the horse’s whinny had given away his position. But, then again, that was why he was here.

In a single, deft movement, John ripped his sword from its sheath. He held the blade in his right hand, and yanked out the pistol in his left. Armed and ready, he paced through the canyon, toward the living earthquake, cyclone, and forest fire that was heading his way. A concussive blast of wind tore his hat from his shoulders and left it hanging from his neck, but he did not slow down. Just around the curve of the canyon, a burst of fire forty feet long erupted into the sky.

Warning signs. The beast knew him, was smart enough to realize what he was doing. They respected each other. He liked to think that the creature didn’t want to kill him.

But that would be the only way to stop John. He could not turn around. Living life having passed up this opportunity would have been too much. He stepped forward again, and again, and came face-to-face with the dragon.

The monstrous lizard was not as suited for this canyon as it might have hoped. The beast was half as tall as the cliffs on either side, and its bulk filled the canyon. Black scales, as dark as obsidian but stained with dirt and dust, served as armor down the beast’s rough sides, neck, tail, and legs. Ridges stuck out, defining thicker parts of the armor. Wings, long enough to reach out of the canyon entirely, were folded at the dragon’s side. Its tail was like a river, powerful, unstoppable, thrashing to and fro.

John stopped and met the beast’s eyes, which were of the purest green. The dragon looked back, and John reaffirmed to himself. Raw intelligence hid behind that gaze, and behind the row of massive teeth, each as long as one of his legs.

A roar, strong enough to crack the rock, blasted directly at John. He weathered the blast of hot air, though there was no fire. If the dragon had wanted him dead, he’d have died already. He leaned against the blow and pushed onward, wincing at the pain in his ears. Even shoving cotton in them before coming wasn’t enough.

The dragon stepped back once, and spat, inciting a wall of flame in front of the lone cowboy. John did not hesitate. He tossed his weapons forward and dove through the flames. The leather on every part of his body would keep him alive, but not unharmed. His had caught fire, and burns lanced across his arms and face. But then he was through, and he rolled to the side, seething in pain. His gun and sword were unharmed. He retrieved them and continued his approach.

This time, the dragon craned its neck back, then whipped out and snapped its jaw closed just inches from John’s nose. He would not be intimidated. With the flat of his blade, he slapped the dragon’s snout, and the lizard reeled back as if wounded.

This was his last chance, he knew. But it was also the dragon’s.

The scaly left forearm of the beast reached out, curved claws glittering. It meant to cleave him in two. John smiled. Had the dragon really wanted him dead, fire would have consumed him. If this killed him, it was his fault, not the dragons. Lifting his six-shooter into position, he fired. Not once, not twice, but all six times. The movement was so quick, it looked like a single shot. Bullet after bullet rammed into the right forearm of the beast, causing it to stumble. The attack went awry.

Tossing the pistol aside, John leapt for the dragon’s left arm. He managed to cling to it with a spare hand, then hefted himself to the croock of the elbow. With a leap, he jammed his sword into the shoulder of the dragon, and it roared. That was nothing but a pinprick to the dragon, compared to its size. Using the hard iron as leverage, he leapt up further and pulled the sword out, spilling thick ichor down the dragon’s arm.

Rolling again across the dragon’s shoulderblades, he landed at the base of the dragon’s spine, and with a thrill of triumphant energy, pushed the tip of his blade through a crack in the black scales.

“Yield,” John said. “Yield, or one of us will die. I have proven my worth. Will the glory of this battle come from your death, or your submission?”

Slowly, so not to jostle the cowboy, the dragon lowered itself until its belly sunk to the ground. John pulled out a strip of leather and wedged it between the scales, making sure that he had good footing. He was about to wrap the leather around the dragon’s neck, when words of his own tongue rumbled through the air.

“One more test I have for ye.”

And the dragon leapt into the air.

John slung to the leather as the flying beast gained in altitude, spinning and trumpeting flames into the sky. Low clouds swirled around them. The iron sword fell, and John clung on for life. They dove, twisted, turned. Jogn had done this before. Leaping on to a wild horse, clinging to the back of the beast until the animal gave in. He had broken horses. He would break this dragon.

And he would have a new steed to replace the one that had bolted.

The dragon bucked and weaved, then spiraled for the ground. The dusty wilderness approached far more quickly than John would have liked. With a ‘thoom’ of air, the dragon spread its wings to full length, and the two set down. One of was burned, one was bleeding, but they were both alive.

And John still clung to the dragon’s back.

“I am Dreq,” that same voice said.